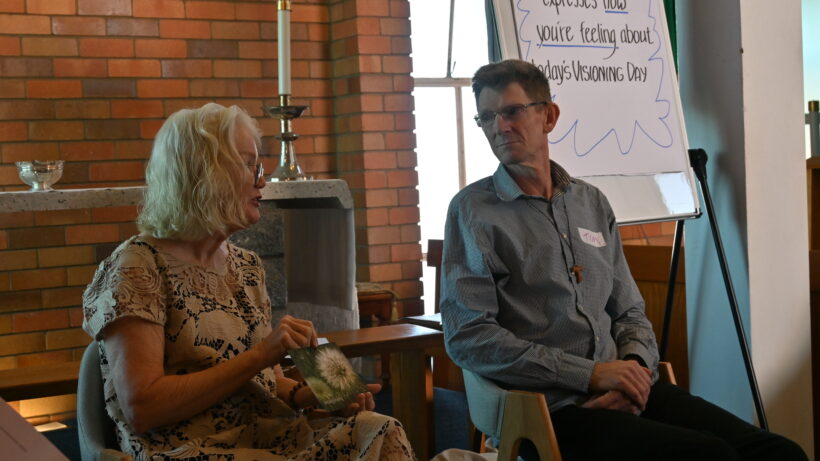 As the anonymous quote goes, “It takes years to build up trust and only seconds to destroy it.” In a recent webinar I attended, a group of parish leaders from around the diocese discussed strategies for increasing inter-parish collaboration, and the foundational role that trust plays in this. But if trust is such a key ingredient in working together and yet is as fragile as the quote suggests, what can we do to enhance it in our relationships with others?

While trust can seem like an intangible substance, there are specific ways it can be fostered in the groups that we have contact with. Jesus’ parables of the Good Samaritan and the Prodigal Son show us that in the divine economy an investment in others by attending to and responding to their needs – without expectation of rewards – builds trust, even where it has seemingly been destroyed. The image shows The Reverend Tim Booth, Ministry Development Officer from the Parishes and Other Mission Agencies Commission, and The Reverend Imelda O’Loughlin, from the Parish of Banyo, at the Nundah Parish Visioning Day on 20 August 2022 sharing in an opening activity designed to establish trust and connection.

Here are seven ideas for growing trust in our relationships with others.

Thirty years ago in his book Seven Habits of Highly Effective People, the late North American leadership consultant and Christian author Stephen Covey, coined the term ‘emotional bank account’. This was used to describe the impact of doing a good deed for another or in some other way showing generosity to them. Covey taught that trust can be likened to a line of credit we build in our relationships with others through small deposits. But doesn’t this make trust sound like the result of transactions that we make with others with the purpose of getting something out of them? Not necessarily.

Jesus taught that the most important ingredients in our lives are the relationships we have with God, with others and with ourselves; and that the quality of these relationships is demonstrated by the love we show others – particularly where there is normally mistrust and animosity (Matthew 22:34-40; Luke 10:25-28). Love is frequently used to describe feelings of closeness to another, but in the Parable of the Good Samaritan Jesus emphasises that love is actually expressed by acting kindly in addressing the needs of another without expectation of reward.

In the parable, a mixed-race outsider observing the desperate plight of a helpless injured Jewish man and tending his wounds is a powerful image of starting compassionately with who’s in front of us. It doesn’t necessarily take a complicated research project, a university degree or the wisdom of Solomon to notice those around us and the immediate needs they may have. Jesus spent his whole life along a 100-mile strip of land on the insignificant outskirts of the Roman Empire investing in the people around him. This investment paid a dividend that you and I share in some 2000 years later, on the other side of the globe.

In the next part of the story the man from the non-Jewish foreign territory of Samaria moves beyond generations of animosity between the two races by immediately treating the victim’s life-threatening injuries. The Samaritan follows through in commitment to his recovery by providing transportation to an inn, paying for his care, and then returning to check in on his progress. Trust is not only built by single acts of kindness, but it is consolidated by ongoing commitment and follow-through. People are quick to notice inconsistency, while trust grows through consistent persistence.

A second parable we encounter in Luke’s Gospel, that of the Prodigal Son, could just as easily be called the Parable of the Trusting Father. In this well-known story from Jesus, we hear of a younger son who disrespectfully asks for his inheritance before his father is dead, and a parent who trusts his son to take responsibility for his own choices and their consequences. As every parent eventually experiences, there comes a point when we must trust that the investment we have made in the relationship with our loved one has left them with strong enough foundations to make their own way in the world.

For me, the high point of the parable is when the father sees his son returning and his heart fills with compassion. Rather than treat his son with anger, judgement and retribution for the early inheritance gift that has been squandered, the loving parent arranges a party for his return, and the household celebrate together. Celebrations build the bonds of trust and communion. But not everyone is happy with what has unfolded.

In the last part of the storyline the older son becomes angry and jealous at the seemingly preferential treatment his wayward brother is receiving. His father is reassuring of the security of his inheritance, but remains steadfast in wanting to celebrate the turnaround in the younger brother’s life. In the face of his older son’s understandable hostility, the father explains the reason for his rejoicing at the wisdom his son found through harsh life experiences encountered as a result of risky choices, and then trusts that the relationship he and his older son have built will stand the strain. In Covey’s terms, the father has made frequent deposits into the emotional bank account of the older son, and trusts that like his younger sibling he too will develop the wisdom to change his attitude as well.

As much as we might naturally jump to judging certain protagonists in these two parables, we are invited in by the master storyteller Jesus to see our own lives reflected in all of the characters. In our common humanity we all share in the capacity for mistrust, trust, and the agency to move our lives towards relationships of greater trust. We can make this move by attending to the relationships right in front of us, responding to others compassionately, following through with consistency, risking showing trust ourselves, celebrating changes of heart, and having the integrity to stand by our trust investments when others may doubt us.

Trust between siblings, races and potentially any group is fragile, and can easily collapse. But when we encounter in Christ the One who sees the best within us and patiently trusts this to become stronger each day, we in turn can experience a strengthening in the bonds of our relationships with others. Want to read more on building trusting relationships? You can see more from Christian author Stephen Covey on this topic at https://www.speedoftrust.com/, because as he reminds us:

“Trust is the new currency of our interdependent, collaborative world.”